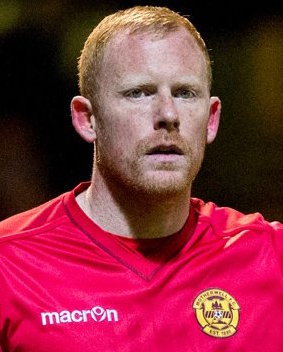 Craig Samson signed for the club in September 2015 after he mutually agreed his release from Kilmarnock, the goalkeeper had actually been approached by the club only two years prior when his transfer had expired but on that occasion he opted to return to his roots and join the club he came through the ranks at.

Before joining up at Fir Park, Craig had recently been involved with the Scotland national side. Most of his career had been spent in Scotland where he served Kilmarnock, Queen of the South, St Johnstone, Ross County, Dundee United, Dundee, Ayr United, St Mirren with just the solitary season spent in England with Hereford United. Samson had built up a decent reputation at Love Street where he helped St Mirren become a regular fixture in the SPL as well as winning the League Cup in 2013.

In his first season at Fir Park, Craig would play second fiddle to the talented Connor Ripley who had joined the club on loan from Middlesbrough and had cemented the number one jersey as his own. Samson would however get a handful of appearances during the 2015/16 season, first off his debut came on the 23rd April 2016 in a fine 1-0 win over Hearts followed by another impressive win over Ross County at Dingwall in May. At the end of the campaign ‘Well boss Mark McGhee offered the goalkeeper a new one year contract which was accepted, Craig was immediately installed as first choice for the following season.

2016/17 is a season most Motherwell fans would rather forget as the club flirted with relegation all year, Samson would play in all but four fixtures during a tough campaign before he eventually lost his spot to Russell Griffiths and then somewhat vanished from the scene completely. Their was no doubt that Craig was a fine shot stopper, but he was susceptible for parring the ball into the danger area in and around the box, prone to the odd blooper and his inability to catch crosses always had the defence under the cosh.

An early season mistake against St Johnstone where he let slip a routine stop right into the path of the Saints striker which gifted them a winner somewhat set the tone of things to come, in fairness the keeper did have some moments, he won some respite from his critics when he ran the whole field of play to celebrate a last minute equaliser against Hamilton Accies, it was around Winter 2016 where he enjoyed his best form for the club.

Sadly his inconsistent performances failed to win over the ‘Well faithful, but thankfully the club managed to beat the dreaded drop. Craig was allowed to leave at the end of the season as they did not wish to extend his contract. He would drop own a division and rejoin Championship side St Mirren on a two year deal.