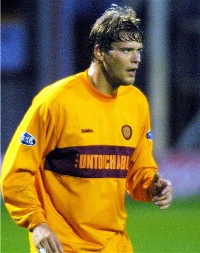 Terry Butcher brought in this big German defender during pre-season 2002, he picked up and ankle knock almost right away which forced him out of the early part of the season. When nearing full fitness, he starred for the Motherwell under 21s in a match against Dunfermline, he scored twice but again picked up another niggling injury. On September 10th, he lined up for Motherwell as they faced Celtic at Fir Park. This game was live on BBC and all of Scotland seen Motherwell defeat them 2-1, with a great performance from the whole side. In his third appearance, he picked up another injury which kept him out again. He returned on October 5th to play Aberdeen but seemed to drop out of favour. On 4th December Motherwell played a mid-week game against Hearts, Daniel played a great game and Hearts’ star striker Mark De Vries couldn’t get a look in. Motherwell won 6-1. Amazingly this was Daniel’s last game for the club and he left in January 2003 on mutual consent.