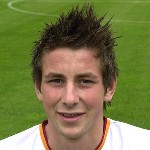 Darren came progressed through the youth ranks at Motherwell, making his debut against Inverness in October 2004 the youngster would become the youngest ever player to represent the club aged only 16. Darren could play both as a Winger and as a Striker, Terry Butcher tipped the youngster to go on to big things. He wouldn’t make another first team appearance until September 2005 where he came on as a sub in a 5-0 victory over Falkirk, he would however follow this up by scoring his first goal for the club against St Mirren in the League Cup, and sadly injury would bring his season to an end.

Under the tutelage of Maurice Malpas, Darren would get far more game team as it appeared he was maturing into a good player, the highlight of the season was perhaps netting a 90th Minute equaliser against Celtic on Boxing Day 2006. 2007/08 was perhaps his best season with the club as he would feature in over 25 first team games scoring four goals on route to a 3rd place finish in the SPL, he did also score against Aberdeen which proved vital in ‘Well’s quest for European football.

He would soon find himself on the fringes and would struggle to carve out a first team place when it was hopeful he would really push on, early in the 2009/10 campaign he was forced to have hip surgery after tearing cartilage, he was loaned to Stenhousemuir but again injury curtailed his stay at Ochilview. He was allowed to leave the club at the end of the season. Darren had been capped by Scotland at U19 and U21 level.