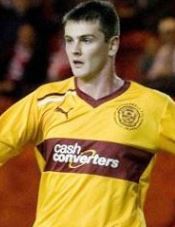 Gary was spotted by Motherwell’s youth coaches whilst playing for Queens Park, he was immediately drafted into the ‘Well’s under 19 side. Such was his impact in the side he would help the under 19’s finish second and Gary would finish the season as top scorer.

Manager Craig Brown was quite high on the youngster ability that he named him as a substitute early in the 2010/11 season as the club played host to Breidablik in the Europa League. Gary would come on as a sub and certainly looked an exciting prospect. Unfortunately for Gary, new strikers Nick Blackman and Esteban Casagolda were signed before the SPL campaign kicked off pushing the youngster further down the ranks. He made his League debut late in the season as Motherwell fell to a heavy 4-0 defeat against Dundee United at Tannadice. Gary would also have spells on loan with Dumbarton and Stenhousemuir but when his contract expired in May 2012 he was allowed to leave the club. He had made four appearances for Motherwell, all coming as a substitute.

He quickly joined Airdrie United on trial after his release from Fir Park but would suffer knee ligament damage in pre-season. Gary would drop down to the junior ranks as he looked to overcome his injury.