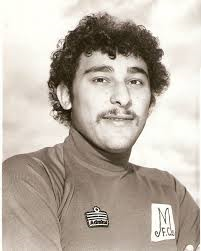 Howard Sammeroff was signed in 1980 from Junior side Kirkintilloch Rob Roy. He was only able to make four appearances for the club and these came during season 1981/82 as Motherwell won promotion into the Premier League. He spent one match out on loan to Hamilton Accies and then decided to play Junior football again. Howard won a Junior Cup winners badge with Pollock. He also had spells with Johnstone Burgh and Yoker.