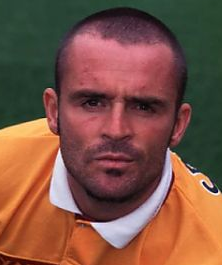 John Spencer joined Motherwell on a 3 month loan deal from Everton. In this time he scored on his debut with a fine finish against his former employer Rangers and became a very popular player with the fans. Once his loan-deal expired chairman John Boyle was tempted to splash out a fee reported fee of £500,000 to secure his services on a permanent basis, a record transfer for Motherwell. John played over 80 matches for Motherwell scoring 21 goals, he was a player who should have made a bigger impact at Fir Park, upon his Fir Park departure he headed to the United States to join Colorado Rapids, he enjoyed a lot of success in the MLS.