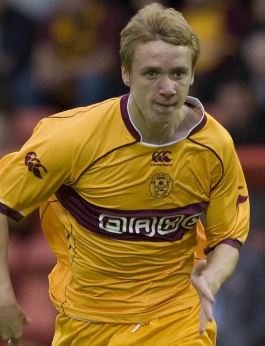 Young winger, Slane progressed through the Motherwell youth system. At only 16 years old, ‘Well manager Mark McGhee was raving about the youngsters talents and took him on the club’s pre-season training camp trip to Obertraun Austria at the beginning of the 2008/09 season. Paul would make his first team debut late in that season coming on as a sub in the Lanarkshire Derby match against Hamilton Accies as the Steelmen comfortably won 3-0.

With a new manager at the helm the following season, he was pitched straight into European games and seemed to flourish under the tutelage of Jim Gannon, putting in impressive performances against Llanelli and he would get on the score sheet in the 8-1 demolition of Flamurtari Vlore. He quickly became a fans favourite, he was a tricky player and enjoyed one on one’s with opponents. Many fans thought he was the best prospect to emerge from the youth system since James McFadden.

Sadly however it would all turn pear shaped, he was listed to start in the opening day’s fixture of the 2009/10 season against St Johnstone but suffered injury in the warm up. He would make a brief sub appearance in the clubs first home game against Kilmarnock but again injury would rule him out for a lengthy spell, it wasn’t until Boxing Day before he would feature again. At the turn of the year he was offered a new contract as he was still registered as a trainee but he declined the offer as Celtic were keen to sign the youngster. He would soon thereafter join the Parkhead club. ‘Well chairman John Boyle criticised Slane for showing a lack of loyalty to the club. Much to the frustration to Motherwell, Slane’s injury problems seemed to ease when he moved clubs and he would become a regular fixture in Celtics youth and reserve side during the rest of the campaign. However he would miss the entire 2010/11 season as he suffered a cruciate ligament injury to his knee. He would struggle to break into the first team scene at Celtic and was farmed out on Loan to both Mk Dons and Partick Thistle where he made little to no impact. He was released by Celtic in early 2013. He had been capped at U17 level for Scotland.