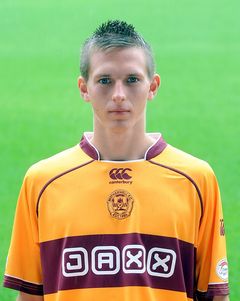 Rutherglen born youngster Steven Saunders was spotted playing for the Queen’s Park youth team when Motherwell made a move for him in 2008. Steven made his full team debut aged just 17 in November 2008 as a sub as Motherwell were beaten 2-0 by Aberdeen at Pittodrie. An impressive display won him a start for the next game covering at right back for the suspended Paul Quinn. Sadly this would also end in defeat as Kilmarnock soundly won 2-0 at Fir Park. It wasn’t long before he got called up to the Scotland U19 side where he would go on to make a handful of appearances.

He grabbed his chance when Jim Gannon took over as manager, Steven would cement his place in the side as ‘Well’s new boss opted to play youth. As the club embarked into the early rounds of the Europa League, Steven would play against the likes of Llanelli, Flamurtari Vlore and Steaua Bucharest. Initially a right full back, Manager Jim Gannon then shifted Steven into a centre back role and he would actually keep Club Captain Stephen Craigan on the sidelines for a lengthy spell. In fairness the young defender came on leaps and bounds as he was expose to more first team football, he would of course help the club keep clean sheets against both half of the Old Firm.

Under the tutelage of Craig Brown he was moved back into the right back position, it wasn’t long before he was called up to play for the Scotland u21s and then was included in Craig Leveins Senior Squad to play the Faroe Islands, he would go on to win his first cap for his country coming on as a sub in a 3-0 win.

In august 2011 whilst on Scotland u21 duty, he ruptured his Achilles tendon which would keep him out for almost the entire 2011/12 season, he did make a brief return when he made a fleeting appearance against Hibernian in April 2012. As he prepared for the 2012/13 season he was dealt another cruel blow suffering a knee injury which required surgery and would keep him side-lined until 2013. Again he would return in the latter part of the season but he would only make another brief appearance. Despite the worst of his injury’s seemingly behind him it came somewhat of a surprise to many when he was told he could find a new club.

After a short spell on trial with English League One side Sheffield United, he eventually was signed up by Scottish Premiership rivals Ross County.