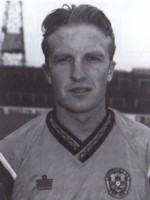 Tony was with Celtic from 1983 when he stepped up from Celtic Boys Club. He made 28 League appearances for the Bhoys and netted 3 goals. His biggest highlight at Parkhead was perhaps making an appearance in the 1986 League Cup Final, Celtic would of course go on to lose the match, Tony was almost sent off amid great controversy when he was adjudged to have struck the referee from behind after the dismissal of Mo Johnston and Tony was given his matching orders, but the linesman had seen the incident where a fan had thrown a coin on the field and the red card was swiftly rescinded. Future ‘Well favourite Davie Cooper scored the winner in that Final.

As he slipped out of favour at Parkhead, he was eventually shipped out on loan to Bristol City before joining Carlisle United in 1988 despite Tommy McLeans best attempts to bring him to Fir Park. Tony was a regular at Brunton Park, McLean obviously kept tabs on his progress and in the summer of 1991 he would pay Carlisle £50,000 for his services. He made his debut coming on as a substitute in a 1-0 win over Airdrie on August 1991. His time at Motherwell was hardly a success as he would struggle to break into the first team, he will certainly go down as one of Tommy McLeans least successful splurges into the transfer market.

He would later play in Northern Ireland with Portadown, Cliftonville and Glenavon as well as turning out for Ayr, Partick, Albion Rovers and Stranraer before moving onto the Junior ranks. After finishing his career he would join the Fire Service and would be based locally in Lanarkshire.