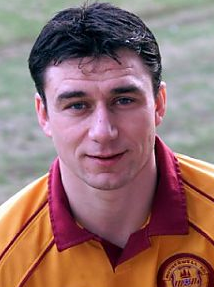 It was Eric Black that signed Yann Soloy and in Motherwell’s case they were taking a gamble because he had been out of action for almost a year, but the gamble did pay off and the ‘Well’s midfield was strengthened, he originally signed on a month’s contract and he was eventually awarded a longer contract until the end of the season after he alleviated the managements concerns about his fitness. He made his debut against Hibernian at Easter Road on the 8th December 2001 and the final result finished 1-1. His first and only goal for the club came at Fir Park in a 2-1 defeat by Livingston on the 2nd February 2002. Sadly at the end of the season Motherwell went into administration and a number of players were released and Yann was one of the squad members to suffer from this fate. During pre-season 1998/99 Motherwell were playing a friendly against Le Havre and Yann featured in that match, the French side ran out 2-0 winners.