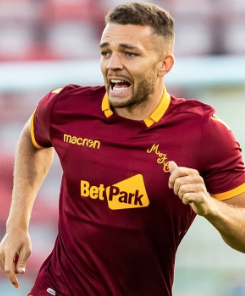 Aaron Taylor-Sinclair joined Motherwell in June 2018, he had returned to Scotland after four years in England where he had served Wigan Athletic, Doncaster Rovers and Plymouth Argyle. He had made a name for himself as a youngster at Partick Thistle where he was known as an attacking full back. His marauding style and consistent form for the Jags helped them win promotion to the Scottish Premiership and consolidate their place in the league the following season. His form had actually seen him being touted for a potential Scotland call up and a potential move to Celtic was also mentioned in the media before he was persuaded to head south to join Wigan Athletic.

He suffered numerous injury woes in England which included a cruciate knee injury which kept him in the sidelines for a long period.

At Motherwell his early career was blighted by injury, he made his debut in the group stages of the League Cup in July 2018 versus Stranraer. In the January 2019 transfer window he moved on loan to English side Crewe Alexandra after having only featured in nine first team games for the Steelmen, he left the club when his contract expired.

He would have to wait until November 2019 to find a new club and it was Scottish Premiership outfit Livingston that offered him a deal. Typically however when the two sides met in a league fixture, Aaron was on hand to score the winner for Livi as they won 1-0 at Almondvale.

In 2021 he would get some international recognition, despite being born in Montrose, Scotland he was eligible to represent Antigua and Barbuda and he won his first cap against Grenada.

As a youngster Aaron had been on the books at Pittodrie with Aberdeen but was released before making any first team appearances, it was with Montrose where he enjoyed making his bow into senior football making playing 70 times for the Links Park outfit.