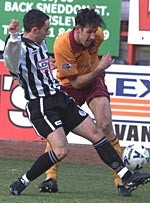 Before turning professional, Derek Townsley had played for Gretna in the Unibond League, before joining Queen of the South.

When Billy Davies signed the Englishman from Queen of the South in 1999 he was 26 year old and this was his first crack at full time football, he had previously worked as a postman to make ends meet during his part time days. Townsley was an unlikely looking winger, standing with a gangly looking frame at 6′ 5″, he looked like he would be more suited to either being a centre back or target man.

Derek made his Motherwell debut in the opening day of the 1999/00 season in a 2-2 draw versus Hibernian at Easter Road. During his time at Fir Park he scored a number of vital goals including a fine finish against Celtic in a 3-2 win. He found it hard to settle at Fir Park due to being a target of the ‘Well fans who seemed to question his application, he stated his family had to stop attending games and this was the reason he departed for Hibernian in 2001.

He had a nightmare appearance playing for Hibernian on his return which seen him being hooked at half time but he would however score a fine free kick at the Davie Cooper Stand end in a future match against Motherwell in August 2002, he took great delight as his celebration saw him run the length of the East Stand gesturing to the home support, he followed this up with another goal in the same match which sealed a victory for the Edinburgh outfit.

Later in his career, he returned to Gretna who were now in the Scottish League and helped them gain successive promotions up the leagues, he also played a part in a Scottish Cup Final where the side from the borders lost on penalties to Hearts, with Derek missing one.