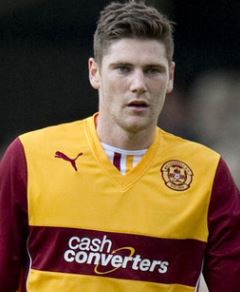 As a youngster Iain Vigurs had been on the books of Aberdeen and then Celtic before he moved onto join Third Division side Elgin City where he would make his first team debut at just 15 years old. Vigurs spent most of hid early career in the Highlands as his next port of call was Inverness Caledonian Thistle.

When he joined Highland rivals Ross County in 2009, he would help the side enjoy great success  as he would help the Staggies win promotion to the Scottish top tier for the first time as well as getting to the 2010 Scottish Cup Final where they were beaten by Dundee United but they enjoyed some impressive scalps on route including a win over Celtic.

In June 2013, Stuart McCall signed Iain for Motherwell on a two year deal where he would link up with former teammate Paul Lawson who also joined from County that summer, it did however look like Vigurs was Oldham bound but the deal collapsed.

Iain made his Motherwell debut in a 2-0 defeat at the hands of Kuban Krasnodar in the Europa League. He was a player who had a wonderful left foot with the ability to spray nice passes around the pitch, however his work rate, lack of pace, laid back approach and the need to try a pirouette each game did pose a lot questions. The was no question the midfielder possessed enormous quality on his day but it became highly frustrating when he didn’t provide it on a more consistent basis.

Vigurs enjoyed a highly successful first season with the club, providing a number of assists and goals as the side managed to snatch the 2nd place finish away from Aberdeen in 2013/14. The following season would see the club battle relegation, it was said that that Iain was suffering a career threatening injury and would vanish from the side before departing the club at the end of the campaign. Miraculously his injury would clear up quickly and he went on trial at Barnsley before turning out for Highland League side Inverurie Loco Works before making a return to Inverness Caledonian Thistle.

Typically as what often happens, on his return to Fir Park with the Caley Jags he would score a wonder goal in a 3-1 win. Iain mentioned after he left the club that he felt that he just didn’t seem to fit into the scheme of things at Motherwell.

Motherwell along with Inverness and Hamilton fought tooth and nail to avoid the drop during the 2016/17 season, but on this occasion Vigurs would experience relegation to the Championship.