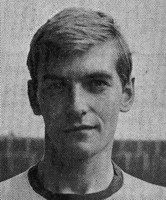 Davie joined the club in 1965 from Jordanhill Training College, he was a strong right back he was noted for his thrusting style and eye for goal. He came from a footballing family, his father Jock a centre-half had served Stirling Albion, Ayr United, Hamilton Accies and also served Rutherglen Glencairn in the junior ranks where he won the Junior Cup in 1939. His brother John was a Hibernian stalwart and then an Airdrie star before being freed by Dumbarton late in the 1970s and his cousin Derek served Airdrie and Dumbarton. Davie was a part-timer at Motherwell, his other job was teaching PE at a school in Wishaw. He made his debut against Rangers at Ibrox in 1966 and proved to be quite impressive, he was also renowned for his penalty taking abilities. Davie left Motherwell for Falkirk in February 1974 and spent three seasons at Brockville and a further three at East Stirlingshire before he ended his career with a season at Rutherglen Glencairn in junior football, the same club who his father won the junior cup with in 1939.