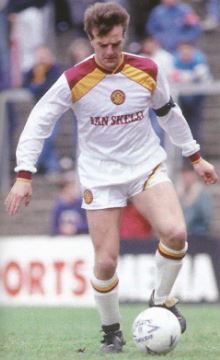 Fraser joined Motherwell in 1983 from Pollock Juniors. By 1987 Fraser was an ever present in the side. He could read the game well, he was a solid tackler excellent on the wings with over-laps, and he developed in a mainstay of the Motherwell side. The scouts were soon on his tail, and St Mirren snapped him up for £285,000 they were arguably the most ambitious side in Scotland at the time. Sadly, three years later Saints were relegated and faced a financial crisis and Fraser was released. He was out of football for an agonising six months and he eventually joined Falkirk in November 1992, but the same old story relegation then released. Luck shone on Wishart as Walter Smith stepped in and took him to Ibrox. Later on Tommy McLean took him to Hearts for only £50,000. In the summer of 1996 Alex McLeish brought him back to Fir Park where he stayed for a season before moving onto Clydebank and then Airdrie, where he ended his senior career.