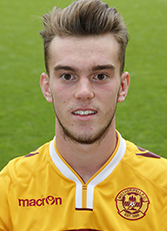 Luke Watt is a product of the Motherwell youth academy. He was perhaps given his first team debut a bit sooner than management would have liked as an crisis in defence during the 2014/15 season left the club with no option but to call upon youngsters from the youth setup. As a 17 year old, Watt was pitched in at left back against high flying Aberdeen on the 4th January 2015 in a match that was covered live on TV. The Steelmen fell to a 0-2 defeat but the youngster put in a decent performance.

Luke would feature a number of times during the campaign filling in for injuries across each position in defence despite his natural position being a right sided defender. He would however drop back into the U20s side occasionally making an appearance on the bench, despite the restriction in opportunities in claret and amber, Watt was sent out on a few development loans to Stranraer and East Fife during the 2016/17 season. Watt was released at the end of the 2017/18 season having failed to carve a regular first team berth.

The young defender was part of the talented group of players who won the Scottish Youth Cup in 2016 where they beat Hearts 5-2 at Hampden to claim the trophy for the first time.