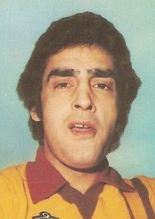 Paul Wilson signed for Motherwell in 1978 for a fee of £50,000. He didn’t stay long at Fir Park, he made only 21 league appearances and scored a single goal before he moved onto Partick Thistle in July 1979. He eventually joined junior side Blantyre Celtic later in his football career. He made over 100 appearances for Glasgow Celtic and was capped for Scotland in 1975.