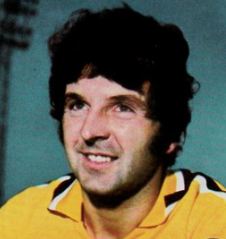 As a teenager, this Scottish school boy cap attracted a number of big clubs from north and south of the border, it was Manchester United he picked. He spent eight years at Old Trafford making 25 first team appearances. Motherwell snapped him up on a free transfer in 1973. He made his debut at Celtic Park in the League Cup, with Motherwell achieving their first competitive win over Celtic in over four years. He could operate at centre half or right back. Willie was a Tall forceful player and enjoyed getting forward.