FATAL BLUNDER BY THE MOTHERWELL DEFENCE

The Celtic, won the Scottish Cup for the fourteenth time by beating Motherwell by 1 goal to nil at Hampden Park, Glasgow, where 102,358 spectators attended and paid £3,725 in admission money, exclusive of grandstand drawings and entertainment tax. It was the Celtic’s twenty-second appearance in the final tie of the competition.

Although the only goal of the match was exceedingly “softly ” obtained, there was no doubt that the Celtic were the more deserving side on the day’s showing, Motherwell playing well below their best in attack.

The losers were on the whole the stronger team in defence, their one lapse giving McGrory, Celtic’s centre-forward, a chance to shoot into the net when less than three minutes of the second half had been played. It was tragic from a Motherwell point of view that their wonderfully sound defence should default so badly on that occasion.

The goal followed a long run on the Celtic right wing by R. Thomson, who was successfully tackled by Ellis, Motherwell’s left-back, in close proximity to the corner flag. Ellis might have put the ball out of play, but he attempted to kick it up-field and drove it hard against Thomson, from whom it rebounded to Ellis. The latter again tried to kick clear and this time the ball struck McKenzie, the Motherwell half-back.

McKenzie then drove the ball against Ellis, off whom it spun towards the Motherwell goal, 15 yards away. McClory, the goalkeeper, might have saved the situation with a quick dash, but he changed his mind after coming, out a few feet and allowed McGrory to scramble the ball past him.

Motherwell might be accounted unfortunate to lose through the medium of such a goal, but their forward play, apart from two good shots by McFadyen and Stevenson, was so poor that they deserved no other fate. McFadyen worked with fine, pluck and, resolution, but got little or no support from the rest of the line, and found it an impossible task to beat the Celtic defence singlehanded.

Stevenson and Ferrier were exceedingly disappointing, both individually and as a wing. The former showed little of his usual command over the ball, and passed poorly, while, if he made one splendid shot which Kennaway, the Celtic goalkeeper, saved at the expense of a corner more by luck than good guidance, he failed very badly to equalise the scores when he had only Kennaway to beat from a range of about six yards.

Ferrier, McMenemy, and Murdoch were hardly ever prominent, either in midfield or in front of goal. It was seldom they could beat an opponent by footwork, and their passing was weak and inaccurate.

In defence Motherwell gave a much better account of themselves, and it can truthfully be said that their only mistake was the fatal one referred to. Ellis was perhaps outstanding, but Blair also merits great praise for his sterling display at centre-half. This youngster showed almost a complete mastery over McGrory, Celtic’s international centre-forward and found time to assist his fellow-defenders as occasion demanded. Crapnell was a cool and resourceful right back, even if miskicking once or twice, and McClory, although he might be apportioned a share of the blame for McGrory’s goal, was an alert and able custodian. He showed excellent judgment when leaving his goal to fist away crosses and corners from the Celtic wingers. Wales and McKenzie were hard-working wing half-backs, with the former more successful on the whole after starting a trifle shakily.

The Celtic were a better balanced side than the losers. Hardly so good in defence, they were much more virile in attack, especially on the right wing, where A. and R. Thomson were by far the most progressive pair in the game. The speedy and determined runs of the latter were the principal menace to Motherwell, and he was most ably supported by the inside man.

As an individualist there was no one to compare, with Napier, whose amazing dribbling at inside left was one of the features of the match. His ball-control was wonderful, and on several occasions he gained 30 or 40 yards by means of clever footwork and elusive running. He had also some powerful shots to his credit.

McGrory was little in evidence, owing to the sound positional play and tackling of Blair, and O’Donnell seemed out of his class at outside-left. He had several of the best chances of the game, and made nothing of them.

The Celtic defence conveyed the impression that they might have been found wanting by a more determined set of forwards than those of Motherwell, amongst whom only McFadyen seemed inclined to risk a knock. Kennaway did not inspire confidence with his method of fisting the ball away, and he was distinctly lucky in deflecting it on to and over the bar from a shot by Stevenson, but, at the same time, he must be given every credit for a very fine save from McFadyen, when a quick sideways dive enabled him to deflect a fast ball just outside the posts. Both Hogg and McGonagle were apt to miskick at full back, but they covered each other well, and their tackling was well-timed and vigorous—too vigorous, in fact, for the liking of most of the Motherwell forwards.

Wilson, McStay, and Geatons were a steady and reliable line of half-backs. None reached a particularly high standard, but each man worked keenly and fairly successfully. Wilson excelled in clever placing, and the others in robust breaking-up tactics.

Most of the good football of the match was seen in the first half, when the Celtic had the wind behind them. Motherwell had a shade the worse of matters territorially, but Kennaway had the more difficult work to do in goal, as it was in this portion of the game that McFadyen and Stevenson made their line efforts to score. McClory was troubled by a “header” by McStay and a shot by Napier, while a powerful drive by the latter beat him and passed inches outside the posts.

After the interval there were few outstanding incidents. The Celtic showed by far the better team work, though it was of little avail against the powerful Motherwell defence, except when the one vital mistake was made by the latter.

The game was fought out in a fine sporting spirit, and was most excellently refereed by T. Dougray.

There was an almost entire absence of “incidents,” and only one player on each side received a mild caution. The teams were as follows:— Celtic: Kennaway; Hogg and McGonagle; Wilson McStay, and Geatons; R. Thomson. A. Thomson, McGrory, Napier, and H. O’Donnell. Motherwell: McClory; Crapnell and Ellis; Wales, Blair, and McKenzie; Murdoch, McMenemy, McFadyen, Stevenson, and Ferrier. 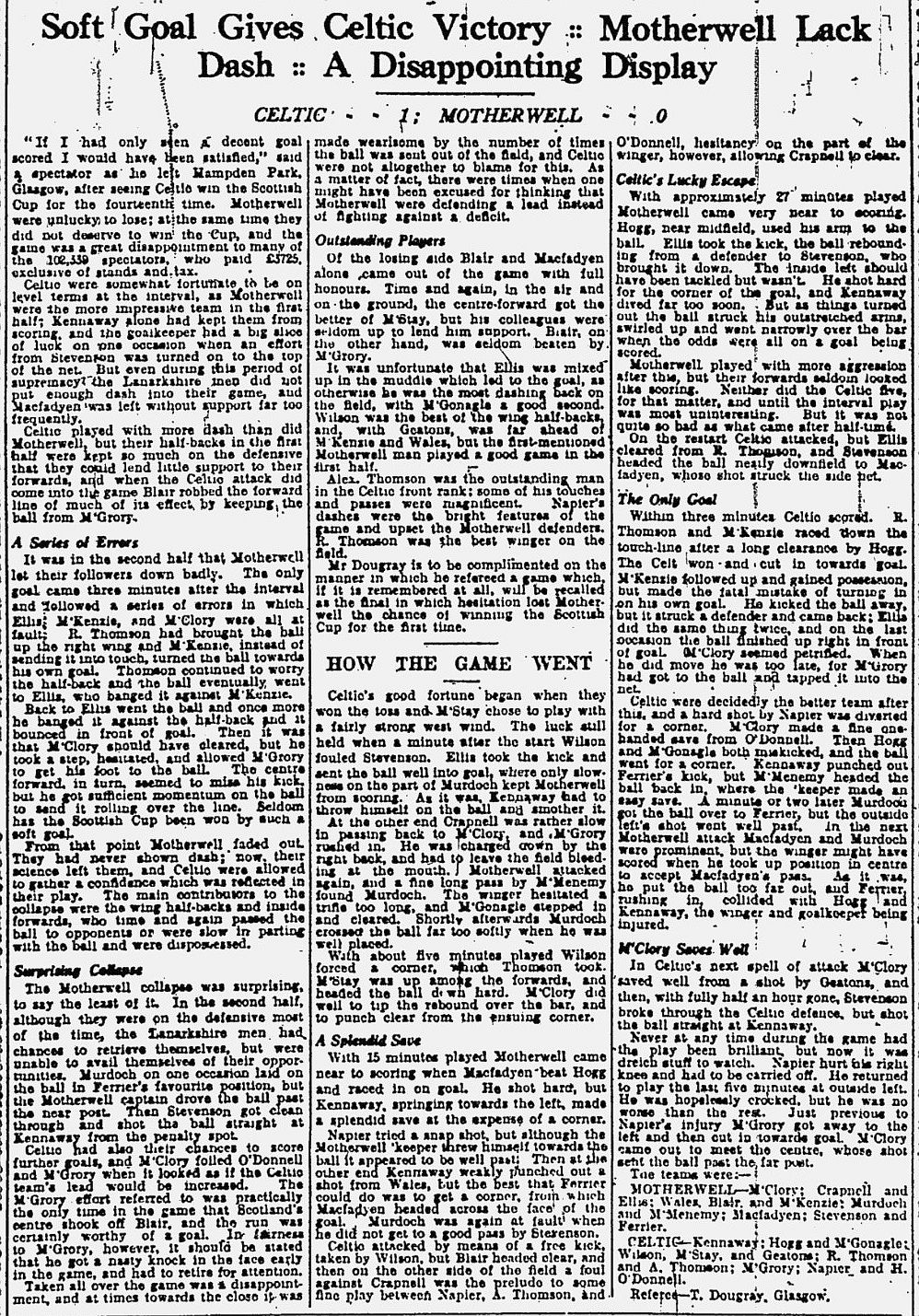