Motherwell paraded seven new signings and not surprisingly it was Norwich City with a more settled side who held the upper hand in an uninspiring match.

The fact that Norwich goalkeeper Robert Green did not have a single direct shot to save in the entire game points fairly clearly to where Motherwell’s shortcomings lie. 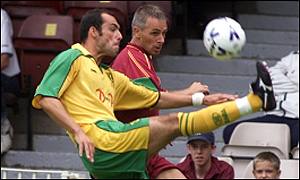 When Irish international striker David Kelly limped off injured after 20 minutes, the Motherwell front line threat disappeared with him and there was only a hint of a strikeforce threat in the closing stages.

One player in the Well ranks entitled to be pleased with his afternoon’s work was goalkeeper Mark Brown.

Brown was signed from Rangers after he became fed up at not getting a regular game as third choice.

When he was beaten, Andy Dow popped up on the line to clear an Abbey header from Phil Mulryne’s corner.

Motherwell’s new back line settled in fairly well, but the midfield was too easily over-run.

Norwich were more alert to the half-chance, but their finishing let them down.

The best effort came a few minutes before the interval when Iwan Roberts sent a drive whizzing over the bar from the edge of box.

Motherwell made a number of changes in the second half to give some of the other signings a chance.

But the only threat at goal came from Stuart Elliott.

The Irishman was off target as his powerful drives flew wide of goal.

Midway through the second half, Emblem had a good chance from the edge of the box but totally mishit as the ball rolled harmlessly into the goalkeeper’s hands.