From BBC Sport
A crowd of 4,091 boosted crisis-torn Motherwell’s fight for survival by braving the Lanarkshire the rain for this friendly draw.

The Serie A side agreed to extend the hand of friendship to the Fir Park club, who were forced to sack 19 players after being placed into interim administration.

The tiny club from Verona, who stunned all in their homeland by clinching a Uefa Cup place in their first ever season in the top flight and missing out on the Champions League by just a point, had not come over for a holiday.

And the Motherwell players will have bruises to prove it.

The home goal came from the promising James McFadden, who cancelled out Simone Perrotta’s second-half header.

Referee Hugh Dallas, fresh from the Scottish Cup final, had to warn several of the visitors for their reckless tackling and the team nicknamed the Flying Donkeys were lucky to finish the game with a full compliment of players.

Dirk Lehmann came close to a first half goal for Motherwell, but saw his effort cleared off the line. 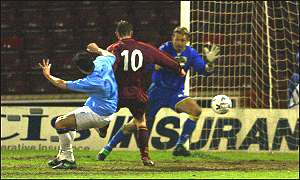 But the Steelmen gave the fans something to shout about with three minutes left when McFadden got on the end of Pearson’s cross to earn a draw.