Motherwell dashed Dundee’s hopes of Premiership survival as David Turnbull smashed home a winner in the 95th minute in an enthralling contest to secure all three points.

A Martin Woods penalty and a nice finish from Ethan Robson had twice put the Dens Park outfit ahead but they were immediately pegged back as a David Turnbull shot deflected over keeper Seny Dieng and after a goal mouth stramash 18 year old forward James Scott scored his first goal at senior level. The sides went in 2-2 at the interval.

The second half proved to be as just as mad capped as the first, Dundee missed a great chance when Mark Gillespie reacted promptly to save a goal bound effort which then clipped the post before being cleared, minutes later winger Gboly Ariyibi put ‘Well in front as his shot beat the despairing Dieng in the Dundee goal. The Dees had an immediate response from a corner as a floated ball into the box found defender Nathan Ralph unmarked who bulleted a header high into the roof of the net.

Spaniard, Alex Rodriguez Gorrin was sent off around the hour mark after his mistimed tackle caught Curran, he had received a yellow in the first half for a similar challenge.

The tide seemed to turn in Dundee’s favour as they had a number of chances, Kusunga had the best of such as he headed against the post but the Motherwell defence managed to scramble the ball clear. Motherwell manager Stephen Robinson responded with a double change with Curtis Main and Carl McHugh coming on for James Scott and Liam Grimshaw.

Despite being down to the ten men, ‘Well managed to come back into the proceedings with Ariyibi testing Dieng as did Turnbull with a free kick which was 25 yards from goal.

Motherwell were awarded a penalty late in the game as Kusunga handled when Turnbull tried to prod the ball past him. Referee Kevin Clancy however reversed the decision moments later after a discussion with his linesman who had suggested that the ball had went out of play. Replays later showed the ball was in.

Dundee were wasteful in possession as the game wore on, Kenny Miller picked the ball up and drove into the box, as centre back Aldred tried to close him down it left a Dundee attacker with acres of space but as Miller tried to square it to him his pass was slack and the Motherwell defence promptly cleared the danger.

17 year old Jamie Semple made his Motherwell debut when he came on in the dying embers of the game for Gboly Ariyibi, as he drove towards the Dundee byeline his low cross was met first time by the right foot of David Turnbull who saw his rocket shot crash off the bar, he managed to meet the ball again with his left foot and thundered the ball past Dieng to seal a deserved win for the Steelmen. 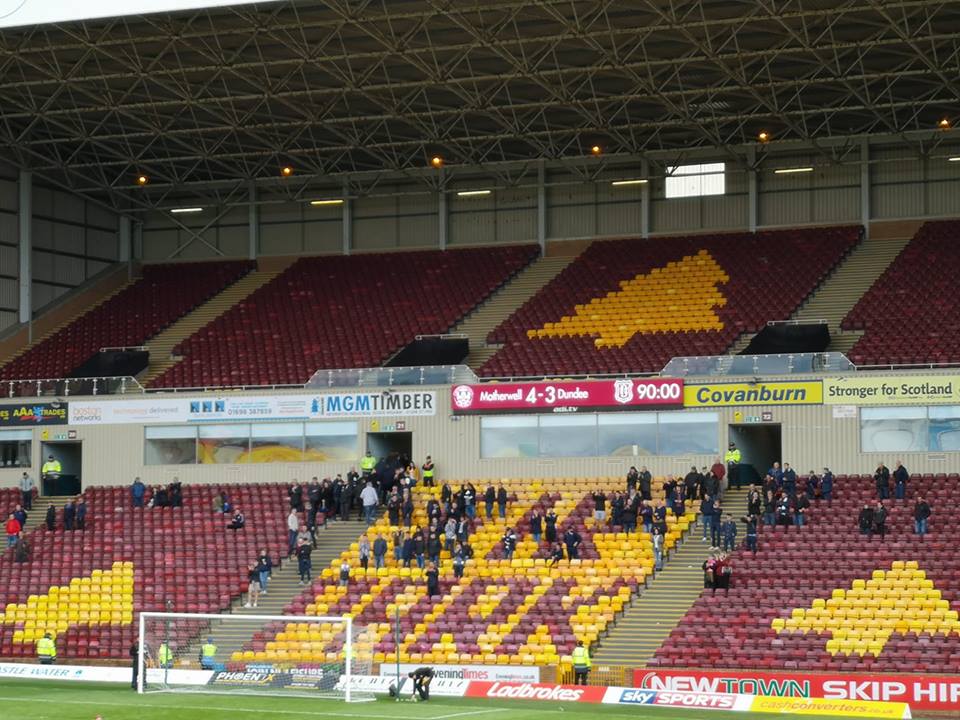