After a decade of stability under Tommy McLean and 3 or so reasonably settled campaigns under Alex McLeish season 1997/98 sparked off some of the most turbulent few seasons in Motherwell’s history. 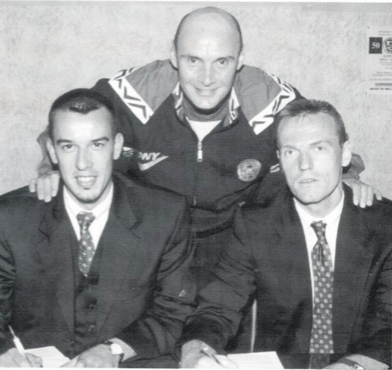 The summer saw more departures with Scott Howie refusing to sign a new contract and ending up going to Reading for a paltry £30,000, some £170k less than Motherwell paid for him. Alex Burns too decided against re-signing and moved to Holland just days before the start of the new season. To replace them McLeish spent weeks, or so it seemed frantically trying to sign two Austrians in the shape of Franz Resch and striker Mario Dorner. The episode ended farcically and saw McLeish, after spending about 6 weeks trying to get them, releasing them just a month into a 3 month deal because of their penchant for a beer or 12 every other night in Motherwell Point.

The start to the season very much echoed the opening weeks of the previous campaign with ‘Well hinting at a promising season ahead, only for things to quickly tumble. By the end of September only St Johnstone had beaten us out with Celtic in the League Cup Quarter Final and Celtic again in a league match we were unlucky to lose 3-2. Already some season highlights had taken place such as a rare but welcome 3-1 win up at Pittodrie, the signing of Namibian Eliphas Shivute and his subsequent first goal for the club in a 2-2 draw at Ibrox.

‘Safa’ as he was nicknamed caught the imagination of the Motherwell support. Having been on trial with Dundee Utd, Hearts and Motherwell, Eliphas Shivute elected to join ‘Well on the basis of the warm welcome he received from McLeish and Andy Watson. In his first couple of games we thought we were watching the next George Weah as his opponents, and in fact team-mates, didn’t know what was coming next. It materialised quickly that neither did Shivute and the apparent incredible close control was largely down to the ball bobbling and ricocheting off various parts of his anatomy in front of him. He thereafter infuriated with bursts of fantastic skill mixed with periods where he looked absolutely terrible.

But the exciting start didn’t last and by mid-November we were deep in one of those familiar streaks of 10 games without a win and 6 consecutive humpings. The board fearful of where the season was going were reluctant to let McLeish loose with further funds, as they sought to protect what they had if the worst came to the worst. Eck was forced to continue to look at the lower end of the market. Trialists flooded to Fir Park like Eric Garcin, who was rewarded with a deal to the end of the season, Marko Tuomelia who left after one skelf inflicting afternoon on the bench at Parkhead, Rob Newman who impressed on a 3 month loan and Gunni Jonsson a candidate for perhaps the worst trialist ever at Fir Park. His two games in the Motherwell team saw him cause mayhem giving away penalties and losing stupid goals. He was so bad he even made John Hendry look something of a world beater.

In true Dossers style though just when you feared the worst we began to turn the corner and make you wonder if maybe at last McLeish was getting it right. A magnificent 2-0 away win at Parkhead was followed up by encouraging draws against Rangers and Hibs and after the usual defeat by Hearts further successes against Dundee Utd and Dunfermline.

A return to our trademark inconsistency might not have been a huge improvement in many people’s eyes but it saw us through enough to just keep the wolf from the door thereafter. Things got a bit interesting in February mind you when just a couple of weeks after coaching ‘Well to a 6-2 hammering of them, our manager decided to jump ship and join Hibernian. Frustrated at being unable to speak to them a year or so earlier the former Scotland internationalist wasn’t going to let this opportunity pass and he took the decision to move to a bigger, if not better, Premier League club.

This of course left ‘Well manager less and after Andy Watson turned the job down to head to the capital with McLeish, the club turned to Finnish coach Harri Kampman, who in 1995 had masterminded the downfall of ‘Well’s UEFA ambitions with MyPa-47.

Little changed at first with the same inconsistencies plaguing the team as they had always done. One week you would beat Rangers, the next you would lose to bottom of the table Hibs. Our SPL place was secured after draws against Kilmarnock and Hearts.

Kampman made a few short term signings in goalkeeper Scott Thomson and Swedes Mats Lundgren and Stefan Lindqvist but they made little or no impact whatsoever and the season ended very much on a low point as the club went their last six fixtures without a win.

In the Cups we began well and made it to the Quarter Finals of the League Cup. Inverness Caley were beaten on penalties after an eventful game that saw ‘Well throw away a 2-0 lead and finish the game with just 9 men. Morton were easily dispatched 3-0 thanks to an Owen Coyle hat-trick before Celtic sneaked through 1-0 at Parkhead in the Quarters. The Scottish Cup again saw one of the Old Firm end our interest. A plucky Dumbarton side were beaten 1-0 after a replay at Fir Park but we produced a very different performance for the visit of Rangers in the next round, 2-1 up with just seven minutes to play a Stevie Woods cock-up allowed Durie into score and before the game had even ended I think everyone within the confines of Fir Park that afternoon knew there would be no second chances. A 3-0 defeat in the replay confirmed our suspicions that we had thrown it away.

The 97/98 season was very much the end of an era, for soon after the final whistle had blown on the campaign many of our favourites that we had come to know and love began to move on to pastures new – guys like Dougie Arnott, Brian Martin, Tommy Coyne and John Philliben – almost 35 years’ service between them, would no longer be with us.

And the new broom that swept through Fir Park didn’t end with our long-serving heroes. The likes of McSkimming, Falconer, Garcin, Lindqvist and Thomson to name a few quickly found out they too were not in the new manager’s plans. It was pretty obvious to everyone that a clear-out had to happen after two or three years the club had been stagnating, but no-one expected Kampman to go about it with quite so much gusto.