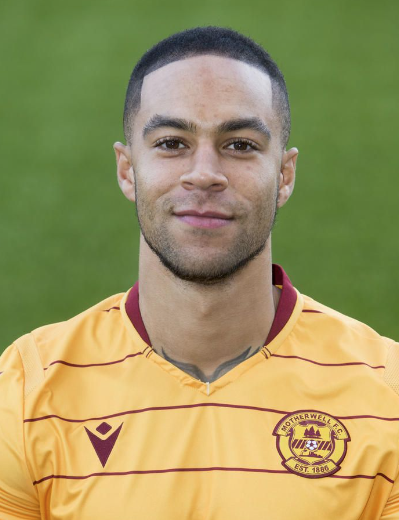 Charles Dunne signed on at Fir Park on the 30th June 2017, he signed a one year deal after training with the club for a short period where he proved his fitness to the clubs management. Dunne had previously been on the books at English League One side Oldham Athletic where he played under the tutelage of current ‘Well boss Stephen Robinson but numerous injuries curtailed his spell at Boundary Park.

As a youngster he came through the ranks at Wycombe Wanderers before joining Blackpool for a sizeable fee. Charles is capable of playing at either centre back or as a left full back, he is strong, composed and has pace in abundance. During the 2017/18 season he was an influential member of the side, his debut came in a League Cup tie at home to Greenock Morton in which he scored a header after on three minutes as the side would record a 4-0 win. Charles took a bit of time to adjust to the Scottish game, early in his Motherwell career he received back to back red cards however one was later rescinded on appeal, when he hit a rich vein of form he proved to be a key component in the side that went all the way to the finals of both domestic cup finals. His first time through ball which set up Louis Moult in the League Cup Semi Final against Rangers was a particular delight as it sent the forward through on goal who chipped the Gers keeper to score a marvellous goal.

The pacy defender brought real composure to the side and he became a popular player with the fans. He was however unfortunate as the following season he picked up a groin injury before the league kicked off and it ruled him out for three months, when he returned to first team action despite playing a full 90 minutes his injury flared up and he was out for a further six weeks.

Charles has been capped once by the Republic of Ireland U21 side which he won in 2013 when he played against the Faroe Islands.