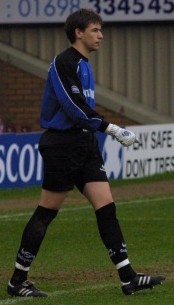 François Dubourdeau joined the club in 2001 and he came straight from lower league football in France. He was one of Eric Black’s first signings for the club using his French connections. François made his ‘Well debut against Celtic just before the league split during season 2001/02, despite not doing much wrong the side slipped to a 0-4 defeat.

At the start of season 2002/03 he was the second choice goalkeeper, as the season progressed the number one keeper Stevie Woods started conceding too many goals, so manager Terry Butcher freshened things up by playing Dubourdeau, sadly though Motherwell lost 1-0 to Kilmarnock at Fir Park in his first start that campaign. Perhaps the biggest highlight for the Frenchman was helping the club to a famous 1-0 win over Rangers in a Boxing Day SPL fixture where he he won the MOTM award due to his superb display.  He also helped the club go on a great Scottish Cup run only to be halted by Rangers in the semi-final as the Steelmen fell to a 4-3 defeat at Hampden.

He was a fine shot stopper on his day but lacked the consistency needed to maintain a regular starting berth at SPL level. Despite being told the club wanted to keep him beyond the end of his contract in 2003, manager Terry Butcher made a U-turn as he looked to bring in veteran Gordon Marshall after his release from Kilmarnock. Francois funnily enough would eventually sign for the Rugby Park club a matter of weeks later.

François would later play for Dundee, Forfar Athletic, Accrington Stanley and Southport before he retired at a young age to pursue educational interests. He did however do some football coaching in the States while studying for his degree.