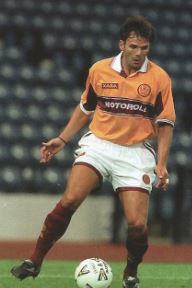 Michel Doesburg arrived at Fir Park early in the 1998/99 season when Finnish manager Harri Kampman looked to bolster his defensive options, he will certainly go down as being one of Kampman’s better additions in his short reign with the club. Capable of playing either at centre or right back, Doesburg proved to be a strong and solid defender. Like most Dutch players he was clever on the ball and with his distribution as he would rarely waste a pass. Michel made his Motherwell debut on the opening day of the season in a 1-0 victory over St Johnstone and would make 59 appearances in all competitions. The Dutchman eventually lost his place when Billy Davies signed Martyn Corrigan who would cement the right back berth as his own, Michel left the club in the spring of 2000 and signed for Jimmy Calderwood’s Dunfermline Athletic in the First Division, he played a small part in helping the club win promotion to the SPL and he would enjoy a winning return to Fir Park where the Pars managed to secure a 0-1 win. Prior to joining Motherwell, Doesburg had played for Haarlem, Wageningen, Heerenveen and AZ. Michel would become a scout after his playing days came to an end.