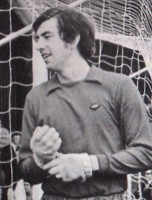 Ally Hunter joined Motherwell on the 15th April 1976, the fee varies in source from £20,000 to £40,000. On this occasion the club never really got value for money, Hunter’s career was winding down and he would only make 12 first team appearances at Fir Park, before moving onto St Mirren a year later. Ally was an impressive keeper from that era, impressive performances for Kilmarnock won him a move to his boyhood heroes Celtic where he won a number of honours. By the time he had arrived at Fir Park he also had won a number of Scotland caps.

The goalkeeper made his Motherwell debut in the League Cup against Partick Thistle in a 1-1 draw, he couldn’t dislodge Stuart Rennie from the number one jersey.