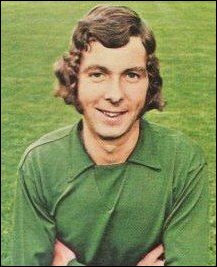 Edinburgh born goalkeeper Stuart Rennie began his football career with Falkirk after going to the Brockville outfit from Royston Boys’ Club, he would win a Second Division Championship medal while starring for the Bairns.

Stuart had an unenviable task of replacing the popular Keith MacRae who had just left to join Manchester City, manager Ian St John negotiated a £100,000 fee with the Maine Road side which simply couldn’t be refused. Rennie arrived as MacRae’s replacement, he had recently lost his first team place to Ally Donaldson at Falkirk, Kirkie Lawson was part of the transfer deal in October 1973 which would see both players switch clubs.

In his early ‘Well games it looked like he might not be up to the task and that he would only be a stop gap as he struggled to gather crosses and a number of fumbles around the box led to the side conceding goals, thankfully however the experience and tutelage from goalkeeping coach Billy Ritchie paid huge dividends as Rennie would develop into a fine shot stopper, who would go onto be one of the best to represent Motherwell in the post war era, as his record proves.

Stuart became renowned for his quick reactions and reflex saves and bravery when it required him to save at forwards feet.

On the 6th November 1976, he played in a match against Kilmarnock where the side found themselves trailing 2-0 in the midsts of a torrential downpour, trying to limit the damage further, Rennie took an oppositions boot to the face which left a gaping wound. Stuart refused to come off the field as it was a time when no substitute goalies were allowed, at half time the keeper got stitched up and carried on with the game making vital saves as the side battled back to win 5-4. Jimmy O’Rourke who amazingly netted a 13 minute hat trick pointed out that Stuart Rennie was the real hero in this fixture.

Rennie was part of the ‘Well side that ensured they won a place in the inaugural Premier League season when reconstruction took place. Furthermore he enjoyed two Scottish Cup runs where the side got to the Semi Finals but both were somewhat controversial in the way they ended for the Lanarkshire side. The first was a replay against Airdrieonians in 1975 when he was penalised for the four step rule, a rule which was rarely utilised by referees. The Diamond’s player John Lapsley made no mistake from the resultant free kick which was enough to secure them the victory. The following season, the Steelmen were cruising against Rangers finding themselves 2-0 to the good, Derek Johnstone went down very easy chasing a long loose ball when Stuart slid out to retrieve it, the referee who was very far away from the incident had no hesitation pointing to the spot, the Govan side would go onto win 3-2.

The talented keeper managed to see off some stiff competition which included former Celtic keeper Ally Hunter and youngster Jim Muir. It was the fact that he was a part timer that would seal his fate at Fir Park. Ally MacLeod sought a replacement and he came in the shape of the eccentric Hugh Sproat from Ayr United in 1979, striker Jimmy Lindsay alongside Rennie headed to Somerset Park as a makeweight for the deal to be concluded. Rennie made over 200 first team appearances while in Lanarkshire.