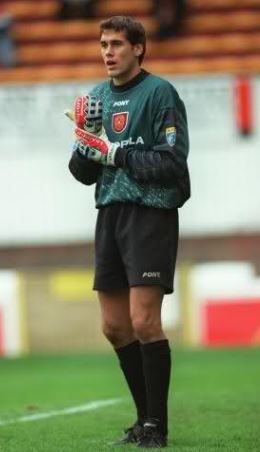 Signed by Alex McLeish in October 1994 for a fee of £200,000 from East Anglian side Norwich City, goalkeeper Scott Howie had began his career with Clyde whom he made 55 league appearances for after breaking into the first team in his late teens. His impressive form not only seen him gain a number of U21 Scotland caps but Norwich were tempted to spend £300,000 for his services. At Carrow Road he couldn’t displace Bryan Gunn and he only made a handful of appearances for the club.

When Howie arrived at Fir Park he was to battle it out with Stevie Woods for the number one jersey, the club had veteran keeper Ray Allan in for a short term stop gap measure as only a few months earlier the squad had no players in the position but McLeish now seemed more than happy with the competition in this area.

Scott had to remain patient in his early ‘Well career as Woods was preferred as first choice, he would however make his debut in January 1995 in a Friday night Sky TV experiment as Motherwell played host to Hibernian, despite making a stunning first half save from a one on one situation the game was an uneventful 0-0. It was around February that year that Howie would become the first choice goalie a position he would hold for the next few seasons.

Apart from his first season at Fir Park where the club finished as runners up in the Premier League, the rest of his Motherwell career was spent fighting relegation battles. He was a fine shot stopper, his performances attracted the interest of Rangers in 1996, but they eventually opted to sign Aberdeen’s Theo Snelders for a fraction of the cost.

Before the 1997/98 season kicked off Howie and the club had a contract dispute, the club hoped to retain his services but with Motherwell struggling financially Scott refused the extension. He disappeared from the scene at this point before moving on loan to English Premiership side Coventry City on a three month loan. In March 1998 the club sold him for £30,000 to Reading who were managed by Tommy Burns on transfer deadline day. He would make over a century of appearances at the Madejski Stadium, later in his career he served Bristol Rovers, Shrewsbury Town and Cambridge United.