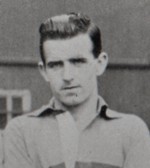 James Johnstone first featured for the club in the 1932/33 season, he was a reserve inside-right who found first team opportunities limited thanks to the likes of John McMenemy and Willie Moffat. His debut saw him feature in the latter stages of the league campaign as Motherwell ground out a 1-1 draw against Third Lanark. His final appearance of the season saw him help the ‘well to a 4-1 victory over Cowdenbeath. The following season he would only feature once for the side and this came in a 2-1 defeat against Falkirk at Fir Park.