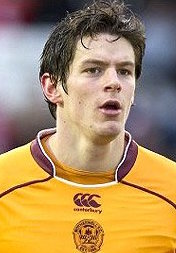 Striker, Lukas Jutkiewicz joined Motherwell on loan from Everton in August 2009, manager Jim Gannon had been looking to bolster his attacking options and was able to bring him in on an initial 6 month deal. Lukas stated both his manager Davie Moyes and goalkeeper John Ruddy who had also joined on loan a short time previously sold him on the move.

Lukas came through the ranks at Swindon Town where he would make his first team debut at 17 and would go on to make 42 appearances netting 5 goals for the Robins. Everton signed him for £1 million in March 2007 but he quickly found any route to the first team was barred due to the array of talent in the Toffees first team, Lukas found himself farmed out on loan to Plymouth Argyle and Huddersfield but he failed to make an impression during these spells.

At Fir Park he would however have a successful spell, Jutkiewicz made his debut against Aberdeen but the game was however a drab 0-0 draw with both sides creating very little. It took Lukas five games before he would get onto the scoresheet where he netted the winner in a 1-0 win over Falkirk.

This of course set him off on the goal trail as he scored a double against St Mirren, a late equaliser in the Lanarkshire derby against Hamilton and further goals against Aberdeen, Dundee United and Celtic. His seven goals in the first half of the season was enough for the management to request an extension to his loan until the end of the season which was duly accepted by Everton.

Lukas offered a different dimension to the squad, he possessed a fantastic left foot in which he could hit venomous drives, he was also willing to take defenders on, he quickly became a favourite of the ‘Well support.

Over the festive period, Motherwell had a change in management where former Scotland boss Craig Brown would resume the mantel. Sadly the excellent scoring form somewhat dried up but he was still an integral part of the squad.

Despite enjoying a fruitful spell at Fir Park, the name Lukas Jutkiewicz will undoubtably spark the same memory for every ‘Well fan if you mention his name. The penultimate game of the 2009/10 season against Hibernian who of course were battling it out with the Steelmen for the last European spot, Motherwell had somehow found themselves down 6-2 at one point but had managed to somehow battle back to 6-5 before missing a late penalty, deep into injury time however, Lukas chased a long punt upfield which seemed to pose no threat only for Jutkiewicz to turn and unleash an unstoppable shot past the helpless Graeme Smith in the Hibees goal which sent all in Fir Park into bedlam.

‘Well gaffer Craig Brown had described the goal as ‘Van Basten like’, it truly was a moment of magic, quite bizarrely though the goal wasn’t even considered for goal of the season because the award had already been presented to Anthony Stokes almost a month before the season actually finished.

Lukas last act in Claret and Amber was to salvage a late point at Ibrox as Motherwell managed another fine comeback where he netted a penalty to secure a 3-3 draw. Craig Brown revealed that he had actually been playing with a knee injury which was incurred almost three months earlier and praised his determination.

As his loan deal expired Lukas did state he would love to stay with the club, but due to his successful spell other clubs were keen to land the youngster, he eventually signed for English Championship side Coventry City, he would go on to carve a decent career at that level and even enjoyed a crack at the English Premiership.