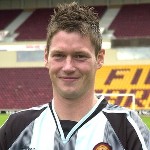 Terry Butcher signed Graeme Smith on a free transfer from Rangers at the start of the 2005-06 season. Initially signed as back up to veteran Gordon Marshall it wouldn’t be long until the young keeper would be thrust into first team action as Marshall was ruled out with a lengthy injury layoff after the opening fixture in the SPL. Smith would make his debut in a 1-0 victory over Dunfermline Athletic. After Gordon Marshall decided to retire from first team football, Smith would battle it out with Colin Meldrum for the number 1 jersey.

He proved to be an able deputy in his early well career and was even called up to Walter Smiths Scotland squad after some impressive form. He would however struggle under the tutelage of Maurice Malpas where he was dropped on a few occasions for poor form. When at the top of his game he proved to be a decent shot stopper but at times he was prone to make an odd error of judgement. One of his memorable games came in a UEFA Cup first round tie against French side Nancy where he produced a number of memorable saves including a fine penalty stop which kept the club in the tie.

The 2007/08 season was perhaps his best season with the club as his consistent form helped the Steelmen achieve a fantastic 3rd place finish as well as helping Motherwell secure Europe football for the first time since 1995. He decided to leave the club at the end of the 2008/09 season to join English League One side Brighton & Hove Albion.

Smith would fail to make any real impact in England before he returned to Scotland to play for Hibernian, he would struggle to cement a first team place at Easter Road as he battled it out with former ‘well keeper Mark Brown & Graham Stack for the keepers spot. He would however feature in the classic 6-6 draw at Fir Park at the end of the 2009/10 campaign. The Hibees were cruising winning 6-2 at one point before the Steelmen would rally back to draw. Graeme had saved a penalty from Ross Forbes earlier in the match. Hibernian released him from his contract in April 2011 and he went onto join an Azerbaijan club called Gabala who were managed by former Arsenal defender Tony Adams. Smith would return to Scotland but would ply his trade in the lower leagues turning out for Partick Thistle, Ayr United & Brechin City.