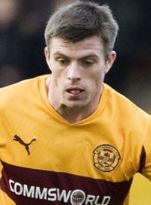 Liverpudlian, Jennings joined the club in the 2009 pre-season and was the first signing of new ‘well gaffer Jim Gannon, Jennings joined on a free transfer after leaving English League One side Tranmere Rovers, he would put pen to paper on a one year deal.

Steven would indeed have a debut to remember, not only was his first appearance in a European game but Motherwell ran out 8-1 winners after a fantastic display. He would however struggle to cement a first team place under Jim Gannon who mainly deployed him as a substitute. It wouldn’t be until Craig Brown took over the reigns of manager that Jennings would really shine.

Due to his consistent form he was awarded a new contract, he would go on to forge a great partnership in midfield with Keith Lasley and would achieve a degree of success at Fir Park. He would help the club to the Scottish Cup Final in 2011 but would sadly have to settle for a runners up medal, in the SPL he would help the club finish to a 3rd place finish which helped secure a place in the Uefa Champions League.

Despite being offered a new contract with the club at the end of the 2011/12 season, this was withdrawn after Rangers went into administration, it was clear the club would have to slash its budget and the club sadly couldn’t retain the popular midfielder’s services. Steve would later join Coventry City.

In December 2010 after getting sent off against Hearts, Jennings was subject to investigation after reports surfaced that there had been some alleged betting patterns on this particular game, Jennings alongside eight other men were eventually arrested on suspicion to defraud in October 2011. It wouldn’t be until April 2012, Merseyside police advised Jennings that their enquires had ceased and that no further action would be taken. There was some Scottish football officials who were quite vocal who had suggested Steve should be suspended by the club.