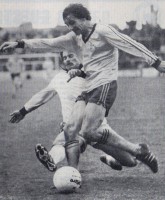 Albert Kidd signed for Motherwell alongside Joe Carson in December 1979 from Arbroath, he had previously been on the books at Brechin City and he proved to be a useful addition to the Motherwell squad.

However, for some reason he was just not happy in Lanarkshire and he accepted an offer to transfer to his hometown club Dundee in 1981 becoming their record signing as the Dens Park outfit paid £80,000 to recruit him.

While playing for Dundee, Albert famously scored twice against Hearts on the final day of the 1985/86 league campaign, this defeat cost Hearts the league championship as it meant Celtic were crowned the Champions and Kidd would make the headlines throughout the UK. Despite never being on the books at Celtic or even Hibernian he is a player who is fondly remembered by the fans of both of these clubs.

After a spell with Falkirk he emigrated to Australia where he would turn out for Hellas before bringing his playing days to an end.