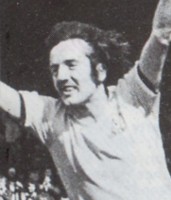 Ian Kennedy arrived at Fir Park in 1973 coming straight from East Kilbride Thistle. He proved to be an able squad player, he starred in a Motherwell side which boasted the talents of Willie Pettigrew and Bobby Graham.

The midfielder played over eighty first team games for the club scoring six goals, perhaps a personal highlight was scoring in a game against Celtic which the Steelmen won 3-0, Ian netted the first and opposition defender Andy Lynch was in a generous mood as he scored two late own goals. The match was significant as the Parkhead side only needed a point to seal the title but the ‘Well side put in a valiant effort to make sure it didn’t happen at Fir Park.

Kennedy is another player that should have delivered so much more in his career, after departing Motherwell his next stop was Clyde before going Junior with Blantyre Vics.