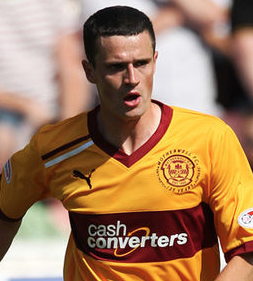 Born in Glasgow in August 1989, Jamie Murphy progressed through the Motherwell youth setup. Capable of playing as a winger, an attacking midfielder or as an outright forward, it was Maurice Malpas that gave the youngster his debut on the 7th April 2007 when he came on as a late substitute in a 1-0 defeat at the hands of Celtic in Glasgow. He would go full circle as his final game for the club in January 2013 was also against the same team with the same outcome, he signed off by wearing the captains armband.

The former Knightswood Secondary School pupil was involved in numerous Motherwell youth sides in his teens as he became a success story with the club as he would carve out a fine career in the game. Jamie developed into a fine player at Motherwell, he was a popular player as his pace and direct play was a joy to watch when he was at the top of his game.

Murphy’s first goal in claret and amber came at the end of the 2007/08 season when he scored from the spot against Hibernian at Easter Road, this of course would be the first as he would net many wonderful strikes over time.

In the intervening period Jamie would make well over 200 appearances for Motherwell in all competitions, represent the U21 Scotland squad and he would overtake ‘Well legend Stevie Kirk in becoming the club’s record European goalscorer. He scored a fine hat trick against Albanian side Flamurtari in the Europa League as the side recorded an incredible 8-1 victory.

Jamie was subject to a cheeky bid from local rivals Hamilton Accies in August 2009 after the New Douglas Park outfit had sold one of their prized assets but this was swiftly rebuffed.

One of his finest goals for the Steelmen came at Hampden in a Scottish Cup Semi Final versus St Johnstone, when he went on a long surging run and his low arrowed shot from range beat Peter Enckelman in the Perth Saint’s goal as the side secured their first Scottish Cup Final place in twenty years. Ultimately, Murphy and his team mates had to settle for a runners up medal as they lost 3-0 to Celtic in the final.

It was perhaps under Stuart McCall that he enjoyed his best football as he played in an attacking outlet that contained Chris Humphrey, Nicky Law, Michael Higdon and Henrik Ojamaa, the side had a score more than the opposition with less emphasis on defence, which drew up some high scoring matches, furthermore Murphy played in victories over Celtic as well as handing out some crushing defeats to Hearts, Aberdeen, St Johnstone, Inverness CT and Greenock Morton.

In January 2013 he was sold to Sheffield United for a reported fee of only £100,000 with additional add ones, the club accepted the lowly fee as his contract expired in the summer. Jamie would spend two and a half years with the Blades before signing for English Championship club Brighton and Hove Albion in August 2015. He would help the Seagulls achieve promotion to the Premier League but he missed out on a league winners medal when Newcastle United pipped them on the final day of the league season.

After five years away, Murphy returned north of the border in January 2018 when he joined his boyhood heroes Rangers on loan, as per the usual when former players come to Fir Park he scored an equaliser in a 2-2 draw. At the end of the season his move to Ibrox was made permanent for the 2018/19 season, however he suffered a horrible anterior cruciate ligament injury at Kilmarnock which put paid to almost a full season.

Despite having knocked on the door for many years, Jamie would make his full Scotland debut against Costa Rica in a 1-0 defeat on the 23rd March 2018.