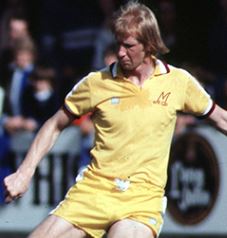 A local lad and Motherwell fan, Peter Millar was brought up in nearby Wishaw. Despite this he started his professional career with Arbroath who he joined from Forth Wanderers in 1969. His next port of call was to join Dunfermline Athletic in November 1969 when they paid £12,000 to secure his services. At the time when he arrived at East End Park he was only 19 years of age and a draughtsman by occupation but interrupted his apprenticeship to take up full time training with the Pars.

Despite having had a trial with Motherwell only a matter of years earlier manager Bobby Howitt signed Peter during the summer of 1972. Millar had played a starring role for Dunfermline when they beat ‘Well 4-1 at Fir Park where he dispatched a penalty, this was the likely catalyst in him being purchased.

In his career at Fir Park he was renowned for being a committed, hard-working, robust player who was also a strong tackler and was always happy to step up to take penalty kicks.

Millar added a real depth to the playing squad as he was comfortable playing in defensive or midfield roles, the only position he never filled in his years wearing claret and amber was as a goalkeeper. In time he would play in a side which contained Stewart McLaren, Gregor Stevens and Willie Watson who were all as hard as nails, the creative spark was created by Peter Marinello and Vic Davidson as Peter essentially done all the dirty work.

He gave the club seven years of great service and was often the unsung hero when others got the plaudits, he played under three managers which included Howitt, Ian St John and Willie McLean.

Despite not winning any honours in Lanarkshire he would play a pivotal role in helping the club qualify for the first Premier Division when the Scottish game when through some reconstruction. He also helped the side get to two Scottish Cup Semi Finals but would just come up short.

Millar had one international honour and this was representing the Scottish League against the English League in 1974.

After 238 games for the club, scoring 22 goals he was allowed to move on and he joined newly promoted Dundee in season 1978/80, linking up with former team mate Stewart MacLaren.

Long after his retirement he did some coaching work with youth players at Motherwell. Peter could often be spotted around Fir Park on a match day but sadly after battling illness, he passed away in June 2013 aged just 62.