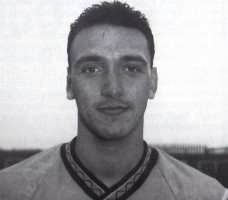 Rob Maaskant was signed by Tommy McLean who saw him as an excellent acquisition for his squad, the Dutchman was a huge central defender with a real physical presence but surprisingly standing at 6′ 4″ he struggled in the air, lacked pace and a number of other qualities that were required for Premier League level.

He was at the club the same time as fellow countrymen Bart Verheul, Luc Nijholt and Sieb Dijkstra as the manager had started to operate in the Dutch transfer market. When Maaskant left Fir Park, it was to join Go Ahead Deventer. Rob had been signed from Emmen in July 1991 and he was allowed to leave the club at the end of the season.

Over two decades later he almost made a return to Fir Park when the club were recruiting a new manager, he was interviewed for the vacant position but missed out on the role. He had carved out a good management career having served  a number of clubs in his homeland.