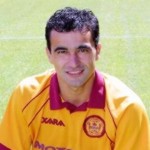 It was Billy Davies who snapped up Roberto Martinez in the 2001/02 pre-season as many new arrivals arrived at Fir Park as the club entered into a transitional period with many high earners being moved off the wage bill. Roberto was a cult hero at his previous club Wigan Athletic who he had joined in 1995 where he would winning the Third Division (1996/97) and a Football League trophy (1998/99). The Latics support were ultimately disappointed in seeing the Spanish midfielder depart, he had actually lost his place in the side to former ‘Well player Ged Brannan who had joined the club on a few months previously.

Roberto had a great touch and awareness and certainly had the skill to be a success in the SPL but sadly things just didn’t work out in Lanarkshire as he couldn’t adjust to the Scottish game and quickly found himself on the fringes of the side. He had made his debut on the opening day of the league season as the Steelmen lost 5-2 to Dunfermline Athletic at East End Park.

When Eric Black became manager after the sacking of Davies, he was given another chance to prove his worth to the side, it would proved to be inconsequential really as sadly in April 2001 the club was put into interim administration and Roberto was one of 19 players to lose their job.

After his playing days ended he took up management starting out with Swansea City before moving onto Wigan Athletic where he pulled off a FA Cup Final shock when his side scored a late win against the oil rich Manchester City, a spell at Everton was followed by his first international role when he took the reigns of Belgium. At the 2018 World Cup in Russia he took the side to the semi finals but ultimately had to settle for a third placed finish.