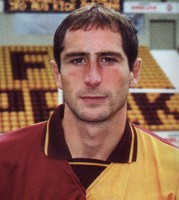 Shaun McSkimming signed from Kilmarnock in November 1994 when Alex McLeish spent £350,000 to bring him to Fir Park, a record transfer for the club at that time. He played on the left side of the pitch and he could play at full back or in midfield adding a new dynamic to the squad. He was a skilful player and a useful goal scorer but he wasn’t exactly a favourite at the club as his performances didn’t meet the standards expected of a player who commanded such a large transfer fee. Throughout his ‘Well years, the only consistent thing the the fans were used to was that he was injury prone. In fairness he was often played out of position as ‘Eck’ tried to shoehorn him into the side but his performances suffered. In his three years at Killie he played 113 times scoring 9 goals at Fir Park he played just over half that in four years. Shaun did manage to score against MyPa47 in Europe and a delightful long range effort which deceived former ‘Well stopper Billy Thomson.

He was one of nineteen players to be released in the reign of Harri Kampman as the new Finnish boss looked to clear the decks. From Motherwell, he joined Jocky Scott’s Dundee side which also saw three other ‘Well stars joining at the same time, these were Tommy Coyne, Willie Falconer and Eric Garcin.