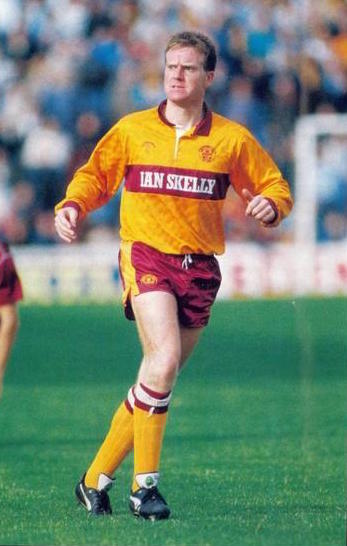 As a 16 year old Colin O’Neill began his career in his native Northern Ireland with Ards. A combative midfielder, he also represented Larne, Ballymena United then Portadown before he headed to Scotland to join Motherwell when Tommy McLean signed him in September 1988 for £15,000.

He arrived in Lanarkshire with a troublesome reputation as his disciplinary record was somewhat a concern but if truth be told he was rarely in trouble during his three years with the Steelmen. Nicknamed ‘Psycho’ he quickly gained cult hero status amongst the’Well support as he had a real energy and enthusiasm and always maintained a high work rate with a real desire to win.

Colin made his league debut in a 1-1 home draw vs Hamilton Accies, later in the 1988/99 season he netted his first goal for the club when he converted from spot against Dundee United in a 2-1 defeat.

A somewhat controversial moment occurred in a league game against Celtic in August 1990 when he caught Peter Grant with an elbow, the match officials missed the incident but it was caught on TV, its perhaps one of those rare cases which delighted most fans of Scottish Football out with the Parkhead side.

It’s not hard to find the highlight of his stay in Lanarkshire as he played a notable role in the side that progressed and subsequently won the 1991 Scottish Cup. O’Neill scored the decisive penalty in the shoot-out win at Morton and he celebrated with a Hugo Sanchez style flip. In a replay against Celtic in the Semi Final he scored a long range wonder goal which went a long way in helping the club secure their place in the final.

Before the Final came around he was badly injured and would only manage to play a matter of minutes in the final, he was heavily bandaged as the Steelmen beat Dundee United 4-3 in arguably the greatest Scottish Cup Final.

Despite enjoying such a wonderful moment by winning a medal with the club, the injury he had been carrying proved to be too serious and at the age of 31 he had to call time on his career. In May 1995 Colin was rewarded with a testimonial match against Ipswich Town.

Born in Belfast on the 14th June 1963, Colin was capped three times by Northern Ireland and once by the Irish League.