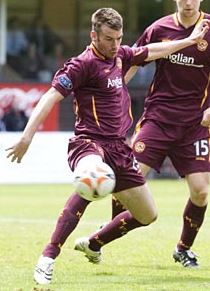 Paul Quinn progressed through the Motherwell youth setup in the early noughties, the Wishaw born youngster signed his first professional contract with the club in May 2002. He was perhaps somewhat fortunate as he was trying to make a breakthrough at a time when the club was plunged into Administration which resulted in a massive player and staff cull at the end of the 2001/02 season.

He would prove to be a versatile defender, despite being a natural centre back his early career at Fir Park would see him more or less make the bulk of his appearances deployed at right full back. It wasn’t until the start of the 2003/04 season until Paul started to make his mark on first team proceedings as he featured more regularly, by the end of the campaign he had played in 29 first team games in all competitions.

In 2005 he came off the bench in the League Cup Final as the club faced Rangers but he ultimately had to settle for a runners up medal as the side lost 5-1.

Despite making his first team debut in 2002, he wouldn’t actually get on the scoresheet until September 2007 when he netted in a 2-1 victory over Aberdeen, Quinn enjoyed a fruitful patch as he followed this goal up with another against Rangers the following month and again in December, his final goal for the club was a late equaliser against Celtic in February 2009.

He progressed into a quality SPL defender this much was evident when he managed to displace fans favourite Martyn Corrigan who ended up being loaned out to Dundee followed by a permanent move to Kilmarnock as he sought first team football as he found the route barred by youngster Quinn.

After the sudden death of club captain Phil O’Donnell in December 2007, Paul was given the arm band at the age of 22 which made him one of the youngest captains in the clubs history. At times his conduct was brought into question as he was involved in a number of incidents out with football.

Quinn enjoyed some international recognition as he won a handful of Scotland U21 caps whilst at Fir Park. He made over 180 first team appearances for the Steelmen in all competitions scoring 4 goals.

In June 2009 his stock was rising which tempted English Championship side Cardiff City to move for his services, the Bluebirds spent in the region £300,000 to secure his services, Motherwell of course had to be patient in receiving the fee as Cardiff decided to stop paying the instalments and it took over a full year to get the full amount.

At Cardiff he made just of 60 first team appearances, he had the heartache of missing out on promotion to the English Premiership as his side lost in the Playoff Final to Blackpool, Quinn didn’t feature in the Final itself but he had played in an earlier tie against Leicester City. The following season the club missed out against this time being dispatched by Reading.

Later in his career he did enjoy some success as he won the English League One title with Doncaster Rovers and the Scottish League Cup with Ross County.

At the age of 32 he was playing for Dundee United in the Scottish Championship but his season was blighted by illness and injury and in May 2018 he left Tannadice after his contract expired, soon there after he just vanished from the scene.