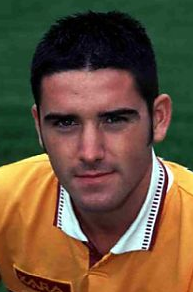 Dougie Ramsay came through the youth ranks at Motherwell. In season 1998/99 Billy Davies gave him his debut when he came on as a sub against Dundee at Dens Park in February 1999, the game was lost 1-0. He did however make further appearances that season but they were confined to coming off the bench. His first goal for the club came at the end of the season when Motherwell defeated Dunfermline Athletic 2-1 at East End Park. In the 1999/00 campaign Ramsay found first team games limited to just two appearances, but he did have loan spells out at East Fife and Stranraer.

During season 2000/01 Motherwell lost key players such as Stephen McMillan, John Spencer and Ged Brannan, this gave Dougie his chance and he started to be selected more often. In the 2001/02 season he was confined to just a solitary appearance until Eric Black departed after the club were placed into administration, Terry Butcher was named new manager and he made Ramsay a first team regular placing him at right-back instead of his usual midfield role. Ramsay put in a series of impressive displays against Kilmarnock (4-1 win) a 1-1 draw against Italian Serie A side Chievo and a 2-1 victory over Dundee which kept him in the side the following season. He played regularly during the 2002/03 season as the club fought through the threat of administration but he was released at the end of the season. Dougie later served Ayr United then Stranraer before dropping down to the Junior’s in 2007.