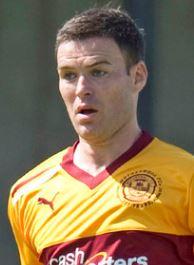 Simon Ramsden joined up with the squad on trial during the 2012/13 pre season. As the previous campaign came to a close club club captain Stephen Craigan retired and versatile defender Tim Clancy opted to join Hibernian, this left Stuart McCall short of options at the back, he offered Simon the chance to win a deal with the club by inviting him in on trial. The Englishman had actually played under McCall at his previous club Bradford City but the latter stages of his career at Valley Parade were curtailed by injury. Despite featuring in an embarrassing 4-0 defeat against Ayr United in a friendly, he did enough to impress the management and was subsequently offered a one year deal.

He certainly offered a new dimension to the squad as he could comfortably play in both defence and in midfield. He would make his debut in July 2012 as ‘Well played host to Panathinaikos in their first ever match in the Champions League. Ramsden had begun his senior career with Sunderland where he only made a brief substitute appearance, He spent most of his career in the lower English leagues turning out for Notts County, Grimsby Town, Rochdale and Bradford City.