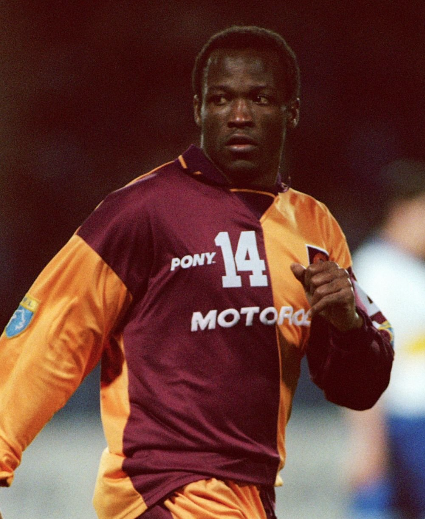 Alex McLeish brought Namibian internationalist Eliphas Shivute to Fir Park fending off stiff competition from other clubs including Hearts and Dundee United and in August 1997 he was officially named as a new Motherwell signing. Sadly the big physical African striker never lasted long in Lanarkshire as he was unable to hold down a consistent starting berth. His initial impression was decent enough, despite making his debut against Celtic at Parkhead in a losing effort, Eliphas made his first start against Hibernian weeks later and instantly attracted the attention of many in the media due to his clever style of play and dashing direct running style but in truth as time wore on it appeared the forward himself didn’t seem to know what route he wanted to take when bearing down on goal. He then followed the Hibs game off with a delightful finish at Ibrox as the side would leave Govan with a point. He would find himself caught up in a bit of a transition as manager Alex McLeish would leave during the 1997/98 season and Harri Kampman would come in, at the end of the campaign despite many stalwarts getting released, Shivute was retained as the Finn looked to put his own stamp onto the playing squad but early in the 1998/99 season, Eliphas would leave under a cloud.

After Motherwell he moved to a club in Germany called Swartweiss. He also later played for a team in China called Shengzen and later in 2002 he signed a 3 month deal with a small Yugoslavian side called FC Cuckaricki. Prior to playing with Motherwell he played in 40 internationals for Namibia with 8 goals to his credit.