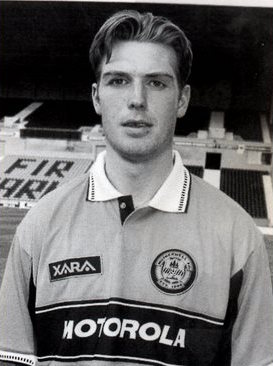 It seems too convenient to be true, but Jered Stirling was in fact born in Stirling. A strapping 6 footer, he played junior football with both St Roch’s and Shettleston Juniors, but it was with Shettleston in the Central League’s where he made the scouts sit up and take notice. In October 1995, he joined Partick Thistle, he’d make his Jags debut against Celtic on 27th April 1996 as Celtic ran out 4-2 winners. Jered was a left sided player comfortable playing either in a full back role or in midfield.

In the pre-season of 1998/99, Motherwell’s Finnish manager Harri Kampman swooped to sign Thistle’s impressive young player. On the opening day of the campaign, he netted the winner as he struck an impressive free kick which won ‘Well’s opening game against St Johnstone 1-0. As time wore on, he started to slide out the side as Stephen McMillan seemed the preferred choice at left full back. In a friendly against Dutch outfit, FC Utrecht, Jered managed to get a trial with them after impressing in a 4-0 defeat, but returned to Scotland shortly after with no deal in hand. Soon thereafter Billy Davies was named new Motherwell manager and Jered Stirling was not in his plans and eventually left the club having made seven first team appearances, scoring the solitary goal. He would later feature again for Partick Thistle and then fellow Lanarkshire outfit, Albion Rovers whom he has scored a fair amount of goals for after making just over a century of appearances.