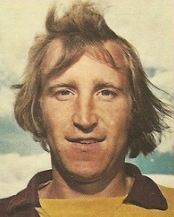 Born in Aberdeen on the 23rd May 1948, Ian Taylor began his senior career with his hometown club after joining them from Banks O’ Dee.

Capable of playing either as a left midfielder or centrally, Ian possessed great pace which more than made up for his slight frame. Earlier in his Pittodrie career he famously in the last day of the 1967/68 season scored the winner as the Dons beat Rangers 3-2 at Ibrox, not only was that the first defeat of the season for the Govan outfit but it meant Celtic would win the league title by two points.

In his earlier days he was viewed as a tremendous talent but he wouldn’t live up to the form he once showed before arriving at Fir Park. Taylor made his ‘Well debut against Dundee on the 27th April 1974 in a 2-2 draw. His first goal came against Celtic in September 1974 in a 1-2 defeat at Fir Park. His ability in being able to play in multiple positions made him a useful acquision, in 1976 he was part of a deal which would see Jimmy O’Rourke arrive at Fir Park from St Johnstone with Taylor heading to Perth.