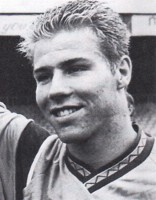 19 year old, Bart Verheul arrived at Fir Park in 1991 when Tommy McLean signed the highly rated striker from Go Ahead Eagles Deventer. His spell with Motherwell was dogged by injury which included a broken leg which severely hampered his progress.

Bart made his debut against Rangers early in the 1991/92 season as he was handed a start in a 2-0 defeat. He would struggle to carve out a regular place in the side and would only make another handful of substitute appearances before departing the club in 1993. Sadly further injury issues seemed to end his career.