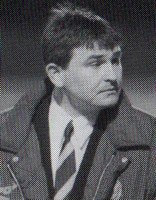 Jim Griffin was put in charge of first team affairs after previous caretaker manager Andy Watson had decided to head to Edinburgh to link back up with Alex McLeish. Jim had been working for Motherwell previously as he became a coach after retiring from playing. He took charge of two games as the club looked for a successor to McLeish with the first being a 2-4 reversal at the hands of Hearts and then the second was a more enjoyable affair as Motherwell defeated St Johnstone at Fir Park on 25th February 1998, a game the Steelmen won 2-1.

Arriving on the day of that game and watching on from the stands was Harri Kampman, a Finnish manager who had masterminded MyPa 47’s victory over Motherwell a few years previously in the UEFA Cup.

Griffin would take up the assistant manager role under the Finn before serving under Billy Davies in a similar capacity but he would eventually move on as he was replaced by Miodrag Krivokapic much to the disappointment of Jim. At the turn of the millennium he moved onto to do some teaching work with Motherwell College/New College Lanarkshire in Sports and Fitness courses before becoming the Head of the Department.