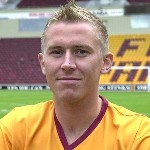 Twenty-four year old Irishman Richie Foran was signed by Terry Butcher at the start of the 2004/05 season. As a youngster, Richie was plying his trade with Shelbourne in the Irish League before being lured to the English League with Carlisle United. A reputed hot-head character, in his short career to date, he had seen many a yellow and red card thrown in his direction for indiscipline. At Carlisle he played over 100 games and scored 29 goals. He also had a loan spell with Oxford United, but on his return to Carlisle he was surplus to requirements.

Terry Butcher later reported that his wife played a big part in the signing of the Dublin born forward, as the story goes the players agent had sent the Motherwell manager a VHS tape of Foran in action, Terry admitted that he had started watching it but left to do some other tasks, his wife and watched all the footage and later said to her husband that “you should sign him, he’s really good.”

Foran was adept at playing either in a forward position or in an attacking midfield role. He would make his debut on the opening day of the 2004/05 season as the side fell to a 2-0 defeat at the hands of Celtic in Parkhead.

Richie proved to be a tenacious player and quickly became a fans favourite due to his 100% effort and commitment. Manager, Terry Butcher worked on the players discipline but Foran did upset the clubs officials when he played some Gaelic football in his home country. At Fir Park the highlight of his stay was no doubt reaching the 2005 League Cup final but this of course ultimately ended in disappointment as the side crashed to a 5-1 defeat against Rangers. He was part of the side that famously denied Celtic the league title in May 2005 when the side beat them 2-1 by netting two goals in the last few minutes. Foran made 105 appearances in claret and amber scoring 35 goals in the process. His last goal for the club was in the first competitive meeting against Airdrie United in a Scottish Cup tie which was won 1-0.

Maurice Malpas sold him to English Championship club Southend United in January 2007 for a reported fee of £200,000. The player would later admit that he felt that he lost two years of his career there.

In January 2009 he was reunited with his old boss Terry Butcher who was now the manager at Inverness CT. Foran would make over 200 appearances at the Caledonian Stadium. Despite the club slipping to relegation he played a pivotal role in helping the club secure their place back in the SPL. He was eventually named the club captain. He went through the pain of losing another cup final when the Caley Jags lost to Aberdeen in penalties. He also had a number of serious injuries to deal with and he missed the club’s finest hour when they lifted the 2015 Scottish Cup.

Upon retiring as a player he was immediately named the new Inverness manager after the departure of John Hughes, despite signing a four year deal his tenure would only last for one season as the club would slip to relegation after battling it out with both Motherwell and Hamilton Accies to avoid the drop.